For our 2012 Pacific Crest Trail thru hike, we are going to need footwear. A lot of footwear! When we started doing our initial equipment list research, it soon became evident that the vast majority of long distance trail hikers don’t wear boots, but smaller and lighter trail running shoes. This is for several reasons.

Traditional hiking boots protect your foot, but are also very heavy. This might matter if going out for a day hike, but multiply this extra weight by a few million steps of the PCT, and the extra weight soon adds to the overall fatigue we will feel.

Secondly, larger and heavier boots take longer to dry. You can get so called ‘waterproof’ or Gore-Tex lined boots, but they all have a large hole in them where your foot goes in. If you are crossing rivers a lot, water will eventually make its way into the boot. The requirement is then for the boot to dry as quickly as possible so you don’t end up with constantly wet and cold feet, liable to blister or cause fungal problems.

Due to this, our footwear choices are mostly light weight, very breathable, synthetic trail running shoes. We both tried on a hole lot of makes and models, both in stores and from the internet. We were both very aware that our footwear choice was probably the single most important piece of kit we needed to get right. Our feet are going to do a lot of work and they deserve to be treated right!

After pretty much trying on every make and model that suited our requirements on paper, we have ended up with the following choices; 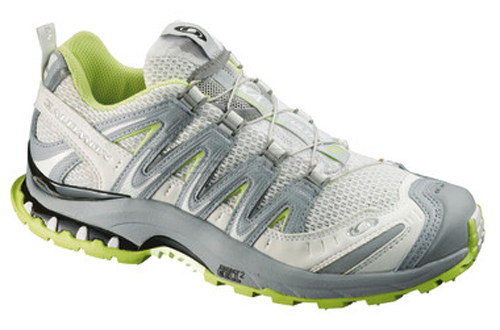 Sarah is going to start off the the Salomon XA Pro 3D Ultra 2. Salomon shoes fit Sarah’s feet very well. The XA Pros are also light weight and have plenty of mesh to increase ventilation. We will undoubtedly end up with sweaty feet, but these shoes will help somewhat. They are white and green now, but probably won’t stay like that for very long! 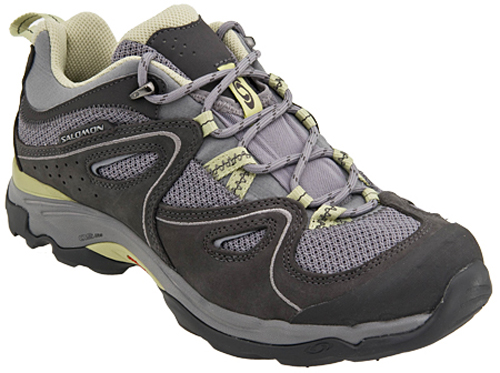 Sarah’s second choice is then the Salomon Tiana. In fact she has 3 pairs of these as they fit her so well. Not quite as light or breathable as the XA Pros, but they fit her like a glove. Features and specs on paper don’t matter unless they fit you properly! Sarah has already owned a number of pairs of Salomon Tianas over the years and are one of the few pairs of shoes that has never given her blisters. Lets hope it stays that way. 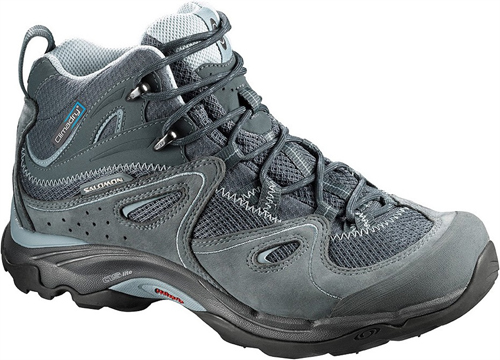 Despite what I said earlier about waterproof boots, we have both opted to take a single pair of lined ‘mid’ boot for the later and wetter sections. Although they wouldn’t stand up to river crossings, they should help keep our feet dry against persistent rain and snow. Due to being so happy with the Salomon Tiana shoes, Sarah has opted for the Salomon Tiana Mid WP, which is essentially the mid boot, lined version of the shoe. 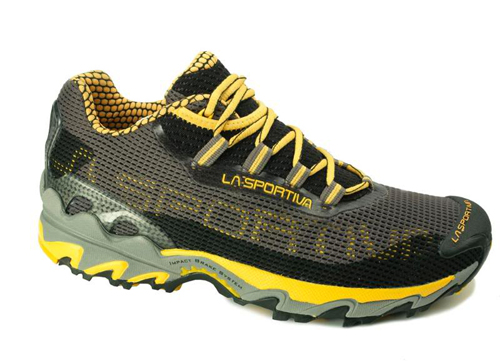 My main footwear is going to be the La Sportiva Wildcat. As soon as I tried a pair of these on I knew they were made for me. They fit like slippers, and are possibly the most comfortable shoes I have ever worn straight off the shelf. They are super breathable with almost the whole top being mesh. The sole is fairly stiff compared to other trail running shoes, but this should hopefully help reduce fatigue and protect me against sharp rocks. I liked the Wildcats so much I have ended up with 3 pairs. 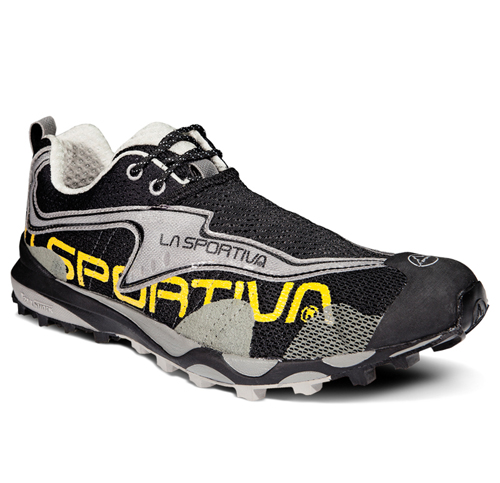 Next up are the La Sportiva Crosslites. These fit me similar to the Wildcats although aren’t quite as breathable. They do have bigger lugs on the sole though so will be better for soft or muddy ground. I bought these before the Wildcats, and with hindshight I would probably have just bought another pair of Wildcats instead. They are still really comfortable though and should perform perfectly well. 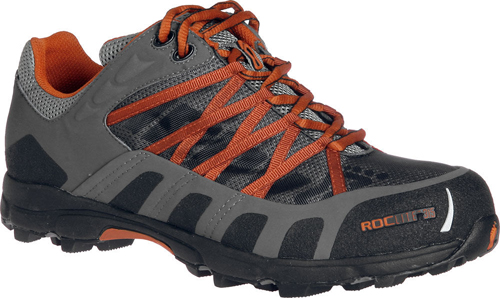 Although it looks like I am sponsored by La Sportiva (We don’t have any sponsors by the way), I am bringing along one pair of Inov8 Rocklite 315 shoes. These are my oldest pair of shoes that still have some life in them. I don’t know how much longer they will last, but I am going to wear them until they fall apart completely. They are very comfortable on the flat, but I do have some slight problems with heel lift when going up steep hills. Because of this I would most likely wear them on the gentler terrain of Oregon if I am going to wear them. The tighter mesh upper of the Inov8s compared to the La Sportiva’s should also help in the fine volcanic dirt of Oregon. 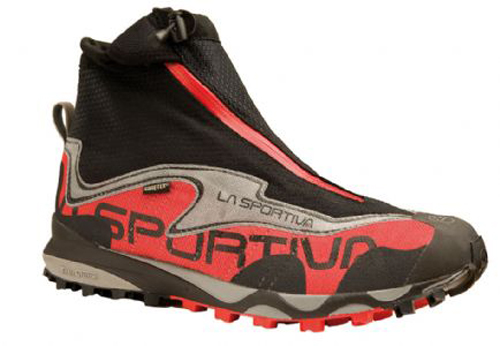 Finally I am bringing a pair of La Sportiva Crossover GTX mid boots. This is essentially a Gore-tex version of the Crosslites with an intergrated debris gaiter. As with Sarah’s mid boots, these are intended to be used once we reach the colder and wetter climates of Washington. They are just as comfy as the other La Sportiva shoes, and the Gore-Tex liner works very well for smaller puddles and wet grass. They also happen to be red and black, my favourite colour combination!

It is estimated that most trail running shoes will last you 400-500 miles per pair. This is why we have ended up with so many. Sarah is taking 5 pairs, and I am taking 6 pairs in total. Hopefully some of them will still be in a usable state by the time we get to the end. We won’t be carrying all the spare pairs with us, but instead they will be mailed further along the trail ready to pick up at resupply points.

One thing that occurs during very long treks such as the Pacific Crest Trail is your feet grow and spread due to all the hammering they take. How much they grow can vary from person to person, but some people experience growth of up to 2 sizes or more! For this reason, Sarah’s footwear for the later sections are a size larger than she would normally need. Unfortunately I am already at the top end of the sizes La Sportiva make. They currently have a fair amount of wiggle room for my toes, so I am hoping that I don’t grow too much. I wish companies would make footwear bigger than a UK size 12. I don’t have unusually large feet, but already it proves hard to find the sizes I need. If I go up to size 13 or 14 it is going to get a lot harder!

Besides our footwear, there are a few other pieces we are taking to make our feet happy. 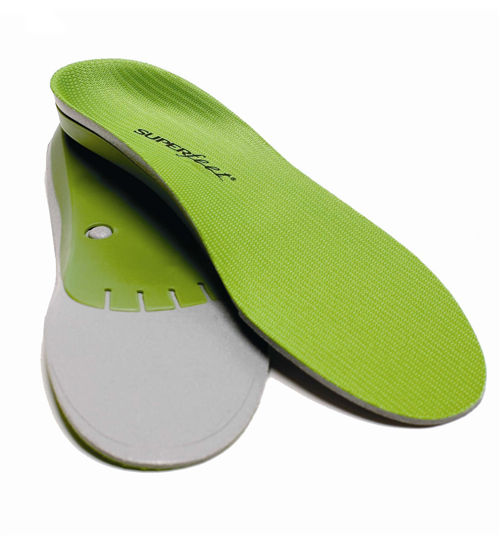 I am trialling a set of Green Superfeet orthotic insoles. Although the insoles that come with my shoes (The La Sportiva ones especially) are comfy, the Superfeet are stiffer and hug the heel much better. This should hopefully result in less fatigue and reduce the amount my foot slips around. For insoles they are pretty expensive, so I have only bought 1 pair to see how I get on. Hopefully they should last for a while, but I may pick some more up along the way.

Sockwise we are both going with Bridgedale wool socks. We did try a number of pairs, including fancy 2 layer Tactel socks from 1000 Mile socks, but they just felt very restrictive and weird. Bridgedale are tried and tested and very comfy. I am also probably going to pack a few pairs of Alpkit wool socks for the cooler sections. These socks I have had for a while now, and although very tight straight out of the wash, they soon loosen to a very comfortable fit.

And the final part of our footwear setup are our Dirtygirl Gaiters. These are lycra debris gaiters that come in just about every colour and design other than black. 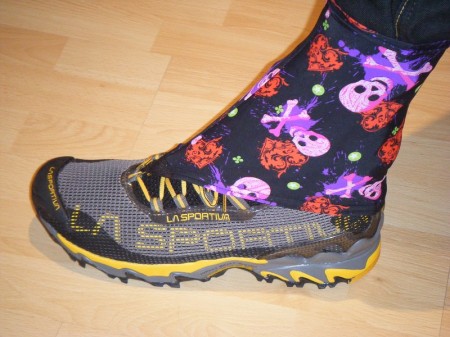 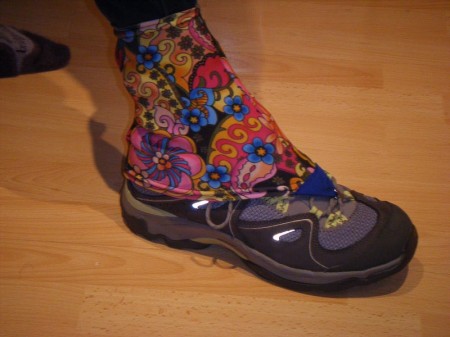 I went for the design ‘anger management’ and Sarah’s are ‘pursuing paisley’. They certainly don’t match any of our other kit, but damn they look good! They should help with keeping small stones and other debris out of our shoes.

So that is how we are wrapping our feet up, enabling them to carry us for 2650 miles hopefully without any injury.