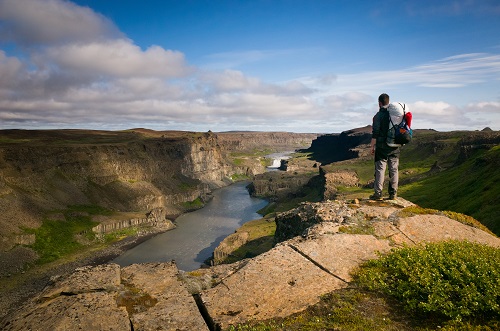 I like walking from point A to point B. It seems more purposeful than walking in a loop and ending up where you started. And it is considerably better than walking out and back. That should be avoided at all cost.

And so it was with this is mind I was staring at a map of Iceland. A place me and my wife; Sarah had talked about going to for years. If you go to a country as exciting as this, you should do some hiking. And hiking should be done from point A to point B. The most northerly tip of the country to the most southerly tip of the country seemed like a good idea. It didn’t look that far on the map. 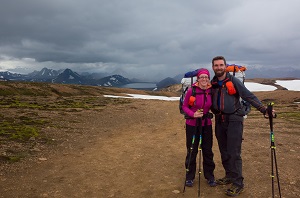 My good ideas have led to some interesting situations. They tend to start with “I’ve been having this idea”. This is soon followed by Sarah raising one eyebrow and saying “what this time!”. Last time I had a good idea we ended up walking the 2650 miles of the Pacific Crest Trail, from Mexico to Canada. Sarah forgave me for that idea in the end, but has reason to worry about when I come up with new ideas. 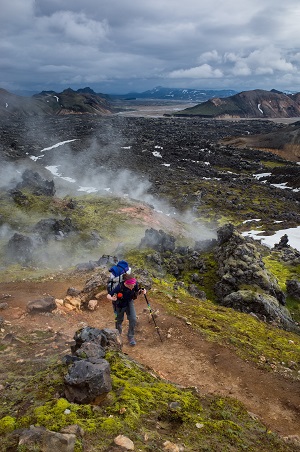 So after a drive, several flights, a bus ride and two taxi journeys we found ourselves standing in thick fog with a cold wind at midnight only 4km from the arctic circle, in a bleak looking landscape. At this point even I started questioning my own decision making. We looked at each other and without exchanging words we knew what we were both thinking; This was going to be type two fun!

But after a noisy night surrounded by arctic turns we woke up and started heading south. One mile turned into two and soon turned into twenty, then fifty. As days turned into weeks, we kept working our way south by track, road and desert and mountain. 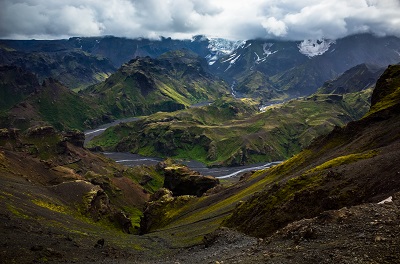 Iceland is a stunningly beautiful country, but it also can do bleak and harsh in equally awesome measures. We crossed through beautiful flower meadows, birch forests and cold rivers, over mountains, lava fields and rocky passes. We had rain, sleet, fog and even some sun as we passed through the country.

Unfortunately last winter, Iceland lived up to it’s name and it had the most amount of snow for 100 years. Combined with an unusually cold summer, the snow levels were still abnormally high. As we got further south we received information that our planned route was blocked by snow. One of our resupply boxes was in a hut behind the huge Askja volcanic crater. In some areas there was still up to 4 metres of snow on the ground, with fresh snow forecast and -8c forecast. It was in the middle of the longest stretch of the route , and would lead us into a very remote area. After much discussion and soul searching, we agreed that although we were there for adventure, this was not a time or place to die. 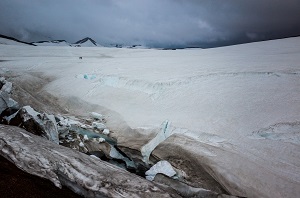 With heavy hearts we skipped ahead to the next mountain hut and picked up our route again. Speaking to the rangers we are glad we made this decision, as the last few days before reaching that hut would have been horrendous and dangerous. Huge glacial rivers were covered by snow bridges, with any actual bridges being hidden by the high levels snow. Added to this, a huge volcanic eruption last winter had made a brand new lava field in our planned route, so even my new maps would have been out of date!

The rest of the adventure went to plan, and despite some long hard days we had lots of fun, not only type two fun, but even some good old type one fun. Our bodies and bones may have been tired, but our minds were at ease and free of everyday life.

A long walk from point A to point B is food for the soul. It gives you time to think. And if you make the walk just long enough, you run out of things to think. And when you run out of things to think you are left with a clear mind, which is something that is missing from our busy lives. My adventures start with me thinking too much, but end with a clear mind. Clear enough to start thinking about the next adventure…